Built the first Twiggy-design trimaran, and with Cathy Hawkins sailed it to Europe to compete in the Round Britain and Ireland Race and the Solo Transatlantic Race.

Returned to Australia and built with Hawkins the well-known 40-foot timber purist ocean racer ‘Bullfrog’/‘Verbatim’. Campaigned what was for several years the fastest and most successful (32 ocean wins in a row) shorthanded ocean-racing yacht in the country.

For 18 months ship’s master of the educational research vessel ‘Penghana’.

Skipper of ‘Utuma’atu’, a timber sailing cargo/passenger trimaran serving the remote islands in the Tongan Kingdom.

One of the three founders of the Australian Wooden Boat Festival (and a life-member). Major interests at the festival include drawing attention to the continuing wasteful clear-felling of boat-building timber carried out by Forestry Tasmania and STT; bringing boat-building to motivated families and running the ‘quick and dirty’ boat-building. Continues to be the Constitution Dockmaster and to hold other significant roles at the festival.

Explorer, chronicler and photographer of the Southwest Coast of Tasmania where I have lost several drones and enjoyed innumerable crayfish.  Author of “The Shank” with the assistance of Andrew Wilson. The first edition was launched in January 2019 and sold out within a year. 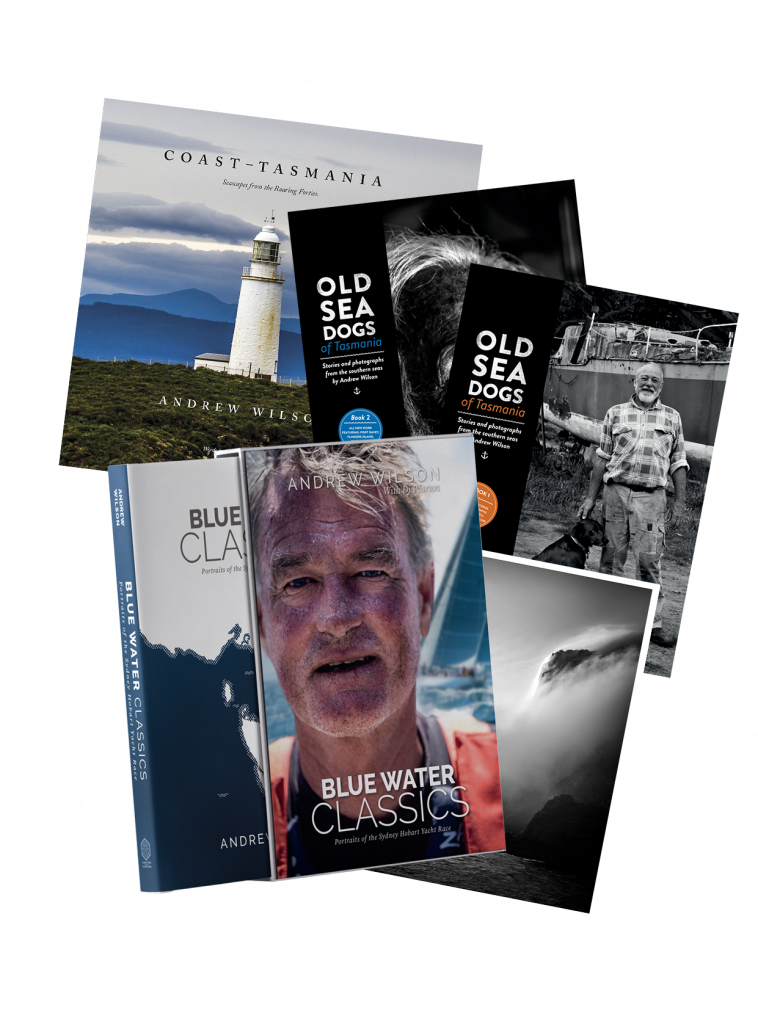 Andrew is a professional photographer and self-published author based in Hobart. Andrew’s work is primarily focused on storytelling through people and place, being strongly influenced by the moods of Tasmania’s landscape.

Andrew and Ian collaborated together to produce The Shank and The Shank Revisited. Ian, whilst older, supplied the youthful exuberance and maritime wisdom in the form of written and photographic content. Whilst Andrew excelled in acting the role of a hard-lined publisher and designer, creating the finished work. The result is a published book that has been very well received throughout the maritime scene in Tasmania, and around Australia.

Andrew is known for his self-published series Old Sea Dogs of Tasmania, a nationally distributed, best selling work produced over a 7 year period documenting Tasmania’s maritime elders, and his recent release Blue Water Classics: Portraits of the Sydney Hobart Yacht Race, written in collaboration with Journalist and Race Media Director, Di Pearson. Over a four year period Andrew travelled from Hobart, to Melbourne, Eden, Canberra and Sydney to document the great race, photographing and interviewing not only the sailors and owners, but the organisers and search and rescue personnel as well to create a 520 page publication that has been described as an ‘Ocean opus’, ‘a rare book on the Sydney Hobart’, ‘an extraordinary book’, ‘a celebration of a globally iconic event’ and ‘a collectors item’.